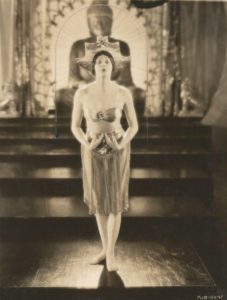 When The Three Musketeers premiered in New York City in August 1921, it was hailed by critics as “a thrilling, gripping, unadulterated success”; “the greatest achievement since the birth of the motion picture industry”; and, “in the words of D’Artagnan”—the film’s gallant hero played by Douglas Fairbanks—, “Marvelous.”  House records were shattered worldwide as crowds stormed theaters, literally fighting their way to box office windows and necessitating calls for police protection.

The Three Musketeers marked the end of Barbara’s time in the shadows of obscurity as an actress.  The thought both exhilarated and frightened her.  While still employed as a storywriter at Fox in 1920, Barbara first met Fairbanks on the set of his film The Mark of Zorro, after Marguerite De La Motte—Barbara’s friend and Fairbanks’s leading lady in that film and The Three Musketeers—invited her to accompany her to work one day.  Barbara’s beauty, charisma, and talent so impressed Fairbanks that he gave her a small part as a tempestuous gangster’s moll in his film The Nut (1921), then offered her the much-coveted role of the iniquitous spy Milady de Winter in The Three Musketeers, a film which was already anticipated to be an international sensation.  Fearful of being recognized as notorious Reatha Watson on the big screen, and the subsequent exposure of her infamous past, Barbara nonetheless accepted the role.  She became disheartened, however, when vaudevillian and film actor Ben Deely, her husband at that time, and various others close to her discouraged her from pursuing an acting career, instead advising her to stick with writing.  Fairbanks refused to hear of it.  When filming for The Three Musketeers concluded, Fairbanks made a prediction. “You are going to be one of the biggest girls on the screen,” he told Barbara.  “Wait and see.”

Indeed, critics applauded Barbara’s supporting performance in The Three Musketeers, declaring her “dazzling,” a “fiery” actress, and worthy of stardom.  More film offers rolled in for Barbara, and within two years she was an established star.  At the height of her fame, she credited the encouragement she received from Fairbanks and director Fred Niblo on the set of The Three Musketeers with preventing her from quitting and fueling her determination to succeed as an actress. 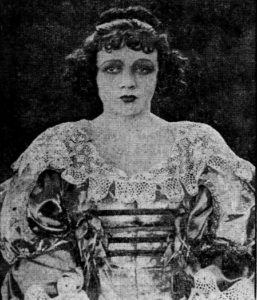 (To learn more about the films Barbara wrote and appeared in, visit the Filmography section of this site.)

Classic Movie Hub invited me to contribute a guest blog for their website.  In my post, “Barbara La Marr: Life on Her Own Terms,” I discuss Barbara’s commendable talents and her unbending determination to succeed in life, despite myriad obstacles and frequent association with scandal.  Read it here.

(There are still opportunities to WIN a copy of my newly released biography, Barbara La Marr: The Girl Who Was Too Beautiful for Hollywood, courtesy of the University Press of Kentucky and Classic Movie Hub!  Get the details here.)

Since I had a window of time between deadlines as my upcoming biography, Barbara La Marr: The Girl Who Was Too Beautiful for Hollywood, nears publication, I compiled and added film synopses for the six films Barbara wrote during her story writing days with the Fox Film Corporation and the twenty-six films encompassing her meteoric career as one of the silent screen’s leading actresses.  They may be viewed on the Filmography page.

In the future, I’ll be writing more blog posts spotlighting specific films comprising Barbara’s screenwriting and acting careers.  Meanwhile, feel free to browse my previous blog posts (see the “Categories” section located on the right—you’ll need to scroll down a bit—and select “Barbara’s Film Acting Career” and “Barbara’s Screenwriting Career” from the drop down menu).  I also have many film stills and other photos pertaining to Barbara’s films in the “Galleries” (see the tab at the top).  Of course, Barbara’s films are additionally discussed at length in my book, scheduled for release in early December 2017 by the University Press of Kentucky.

At the height of her fame in 1924, Barbara La Marr reportedly earned the modern equivalent of over $30,000 per week as a reigning vamp of the silent screen.  Never far from her heart, however, was an inherent compulsion to express herself through the written word.  She first put her thoughts to paper as a young girl, composing little verses and short stories.  As a young woman, her inner musings took the form of poetry, pouring from her, she said, when she was so consumed with emotion that she just had to have an outlet.  Her very first full-length story caught the attention of Winfield Sheehan, general manager of Fox Film Corporation, and won her a contract with Fox in 1920.  Fueled by her incredible life experiences, Barbara ultimately penned five original stories and one adaptation for Fox.  She put her writing talents to further use crafting intertitles for Fox films and, later, by doctoring scenarios for other studios’ films in which she played starring roles.

All the while, poetry remained her favorite medium of literary expression; to her it was “the freest of the free.”  When not before the camera, Barbara sometimes sat on the sidelines of film sets, transcribing her heartfelt feelings into verse and scribbling story ideas.  She vowed to one day return to her typewriter, when her career as a film actress had “gone by with the glories.”  Sadly, her tragic, untimely death in 1926 at the age of twenty-nine cut short her aspiration.

The six films Barbara wrote for Fox have yet to be located by film preservationists.  For now, her writings live on in her poetry.  Three of her poems, written before the breakdown which resulted in her death, appear below. 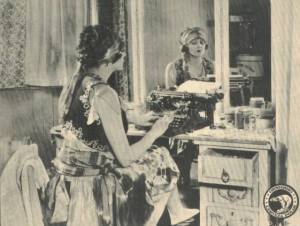 Why should I—who worship Thought—

Why should I speak to you of HIM?

Why should I tell you all these things—

Of hours when Passion’s wearied wings

Folded beneath a mauve grey sky

Of dawn—that ever means “Good-bye?”

When I have tasted the gods’ delights;

Of lips I have kissed, and kissing burned—

Of loves I have left and loves returned.

When dreaming and close at my side

I felt the urge of Passion’s tide,

I closed my eyes and infinitely sad,

Dreamed of that which I have never had.

But why should I—who worship Thought—

Bear my Soul to you unsought—

Your lips, your hair, your eyes,

Your smile, your curls, your glance,

You pagan worshipper of Chance…

Moths?— I hate them!

Because to me they seem

Who have passed on.

That find, now as always,

Irresistible the warmth of the

Taking no heed of the warning

That merely singed their wings

To filmy ashes of golden dust.

Moths! I fear them!

Yet I watch them fascinated

Perhaps they are not useless

Nor the message they convey

To me, a futile one.

They make me see the folly

Of seeking that which it seems

Women were created for—

The futility, the uselessness of longing—

Perhaps you do not understand,