A big thank you to photographer and author Greg Autry for reviewing my Barbara La Marr biography in Splash magazine.

“Some may say [Barbara La Marr] was destined for a life of ruin, but in Sherri Snyder’s skillfully written biography about the ‘too beautiful’ silent screen vamp of the 1920s, La Marr’s story becomes a compelling look into a young, beautiful woman’s brief journey to fulfill her destiny.”—Greg Autry, Splash

The entire review may be read here.

Silent screen actress Barbara La Marr was a legend in her time, leading an astounding, oftentimes scandalous life described by newspapers of the day as “a wilder story than she ever helped to film.”  Join me, Sherri Snyder, at Hollywood Forever Cemetery on Sunday, October 2 as I once again portray Barbara in a one-woman performance piece that I wrote about her.  Barbara’s banishment from Los Angeles at age seventeen for being “too beautiful”; her notable careers as an actress, a dancer, a vaudevillian, and a screenwriter; her tragic death at age twenty-nine in 1926; and more will be spotlighted.

In addition to portraying Barbara on the tour for many years, I have had the honor of producing it since 2017.

Click here for tickets and additional details. This event typically sells out.

I recently had the pleasure of discussing the unbelievable life and estimable career of silent screen luminary Barbara La Marr; my biography, Barbara La Marr: The Girl Who Was Too Beautiful for Hollywood; and my one-woman show about Barbara on Yesterday USA Radio with Walden Hughes. Listen to a replay of the live broadcast here (the interview begins after about a minute and fifty seconds of music and is approximately fifty-four minutes long).

Barbara La Marr considered writer, director, and producer Paul Bern among her closest friends and confidants.  Deeply in love with Barbara, Paul assisted her with her career, sought to protect her during her oftentimes turbulent love affairs, and helped her with her medical and funeral expenses after she contracted pulmonary tuberculosis and nephritis.  “No one is really poor who can boast the friendship of Paul Bern,” Barbara stated before her passing.

In an encore appearance on David A. Health’s Cinema Chat podcast (beginning shortly after 51:00), I discuss Barbara and Paul’s relationship.  The first part of the podcast features Laura Riebman, Paul’s great-niece, discussing Paul’s influential role in early Hollywood, his marriage to platinum bombshell Jean Harlow, the impact his sensational death had upon her family, and her efforts to commemorate Paul’s professional achievements with a star on Hollywood’s Walk of Fame. The podcast may be accessed here.

(My Barbara La Marr Cinema Chat podcast may be found here. I discuss Barbara’s turbulent teenage years; her many matrimonial ventures; her accomplished careers as a stock theater actress, dancer, vaudevillian, and Fox Film Corporation story writer; her ascension to worldwide fame as one of the silent screen’s leading actresses; and more.)

Many thanks to Dixie Laite, a wonderful writer and mayor at Dametown, for reading my book and spotlighting Barbara in Dametown’s Hall of Dame. Dixie writes, “Get ahold of Sherri Snyder’s definitive biography, Barbara La Marr: The Girl Who Was Too Beautiful for Hollywood. Sherri has the intelligence, insight and sensitivity to get Barbara’s complexity.” Dixie’s Barbara La Marr post may be read here. Be sure to check out Dixie’s many other fascinating posts as well!

Happy Birthday Anniversary to the one and only Barbara La Marr (July 28, 1896 – January 30, 1926)! Though Barbara passed away at age twenty-nine from tuberculosis and nephritis, it was said that she lived many lives in one.

Thank you to David Heath, host of Cinema Chat, for having me on his podcast to discuss Barbara’s turbulent teenage years; her many matrimonial ventures; her accomplished careers as a stock theater actress, dancer, vaudevillian, and Fox Film Corporation story writer; her ascension to worldwide fame as one of the silent screen’s leading actresses; and more.

My book, Barbara La Marr: The Girl Who Was Too Beautiful for Hollywood, is currently 50% off on the University Press of Kentucky website as part of their annual holiday sale.  The sale will last through January 31, 2019.  (Be sure to enter the specified discount code when checking out.)
Happy Holidays! 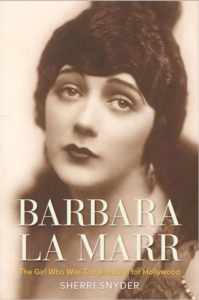