On the anniversary of Barbara’s birthday, July 28, 1896, I am very happy to report that, after submitting the completed manuscript of my Barbara La Marr biography to an esteemed publisher several months back, they distributed it to an anonymous panel of expert readers (authors, film historians, etc.) and it has received wonderful feedback thus far.

Here’s what a couple of non-anonymous readers have to say:

“Sherri Snyder digs deep into the life of Barbara La Marr, giving an in-depth look at the intelligence and talents of the “Girl Who Was Too Beautiful.”  We see the real three-dimensional La Marr for the very first time, a thoughtful, generous, and creative woman who died much too young.” —-Mary Mallory, film historian and author (Hollywood Celebrates the Holidays: 1920-1970, Hollywoodland: Tales Lost and Found, and Hollywood at Play: The Lives of the Stars Between Takes)

Meticulously compiled from myriad sources—including never-before-released information from Donald Gallery (Barbara’s son) and descendants of people close to Barbara, Barbara’s private diary, memoirs of those who knew and romanced her, and an extensive collection of Barbara’s poetry—the book, tentatively titled The Girl Who Was Too Beautiful: The Extraordinary Life Story of Silent Screen Vamp Barbara La Marr, presents an intimate look at Barbara’s life story, told in its entirety for the first time.  I thank everyone from around the globe who has expressed avid interest in the book and offered kind encouragement throughout the years!  It was Donald Gallery’s lifelong dream that his mother’s complete, long overdue biography be written;  I sincerely thank him for entrusting me with that dream.  I am honored and excited to present this book to the world and will post publication details as soon as I have them.  Meanwhile, I offer an overview of the book below.

In 1914 at age seventeen, strong-willed, already infamous Reatha Watson was declared by juvenile authorities to be “too beautiful for the city” and banished from Los Angeles.  She soon returned, only to become further mired in scandal and subsequently barred by the film studios from working as an actress.

Unwilling to stifle her burning ambition and manifold talents, she pressed forward, reborn as Barbara La Marr.  An innately gifted dancer, she achieved renown in the foremost cabarets throughout the country and on Broadway at the height of the pre-WWI dance craze.  Then she toured the vaudeville circuits, acting in headlining comedy skits to general acclaim.  Still under the guise of her assumed name, she next became a storywriter for the Fox Film Corporation in the same town that cast her out, earning the modern equivalent of a six-figure salary.  Her exotic beauty, curvaceous form, and potent presence, epitomizing an ascending breed of 1920s screen idol—a shameless, volatile woman who ensnared men with her femininity—, enticed film producers.  She temporarily averted association with her increasingly turbulent past long enough to reign as a preeminent sex goddess of the silent screen.

Through it all, her tumultuous private life striped the pages of newspapers and film magazines.  After her death at age twenty-nine caused a furor in downtown Los Angeles in 1926, her publicist confessed, “There was no reason to lie about Barbara La Marr…Everything she said, everything she did was colored with news-value.  A personality dangerous, vivid, attractive; a desire to live life at its maddest and fullest; a mixture of sentiment and hardness, a creature of weakness and strength—that was Barbara La Marr.”

Her extraordinary life story is one of tempestuous passions and unbending perseverance in the face of inconceivable odds.  It is of a woman’s fierce determination to forge her own destiny amid the constant threat of losing it all to scandal and, ultimately, death. 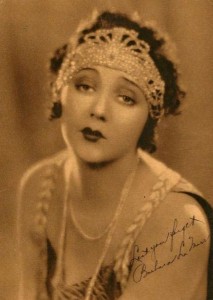 “Lest you forget—Barbara La Marr”