Legendary silent screen goddess Barbara La Marr was known as much for her laudable career as for her infamy.  Her tempestuous life, the scandalous headlines she generated, and her sultry screen image are only part of the story, however.  Learn more in my guest article, “Barbara La Marr: Beyond the Legend,” on Midnight Palace, a website devoted to classic film culture.  (NOTE: Due to technical difficulties on the Midnight Palace site, I have temporarily removed the link; until the link is up and running again, feel free to read the article I wrote for Classic Movie Hub, “Barbara La Marr: Life on Her Own Terms.”)

(Read Barbara’s complete story in my newly released biography, Barbara La Marr: The Girl Who Was Too Beautiful for Hollywood, available on the University Press of Kentucky website, on Amazon, and from other booksellers.)

Barbara La Marr’s stamp commemorates her starring role in The Eternal City (1923), a film based upon Caine’s bestselling 1901 novel of the same name.  As the author of Barbara La Marr: The Girl Who Was Too Beautiful for Hollywood, I was honored to have been asked to provide photos for Barbara’s stamp, one of which (a portrait, not an image from the film) was chosen.

View and learn more about this exquisite collection of stamps here and here. 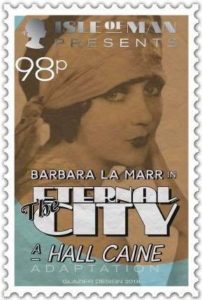 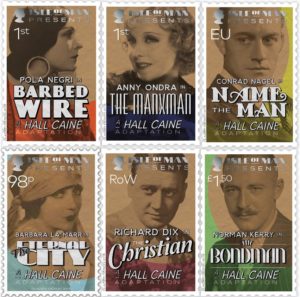