Silent screen actress Barbara La Marr was a legend in her time, leading an astounding life described by newspapers of the day as “a wilder story than she ever helped to film.”  Join me, Sherri Snyder, on Wednesday, July 18 at the Fred Hesse Community Park, 29301 Hawthorne Blvd., Rancho Palos Verdes, California 90275, as I portray Barbara in a self-authored performance piece, then lecture about her, detailing her oftentimes scandalous life from her humble beginnings to her tragic death at age twenty-nine in 1926.  Barbara’s banishment from Los Angeles at age seventeen for being “too beautiful”; her notable careers as a dancer, a vaudevillian, a screenwriter, and an actress; her impact upon cinematic history; and her fierce determination to forge her own destiny amid the constant threat of losing it all to scandal and, ultimately, death will be spotlighted.  I will also answer questions about Barbara and sign copies of my book, Barbara La Marr: The Girl Who Was Too Beautiful for Hollywood.  The event, beginning at 10:30 a.m. and roughly an hour and a half long, is being held in the park’s McTaggart Hall and is FREE to attend.

What a thrill it was for me to visit Barbara’s former residence at 6672 Whitley Terrace in Los Angeles this past weekend.  Nestled in the historic Whitley Heights neighborhood, an area that was once home to a constellation of some of the biggest stars of Hollywood’s Golden Age, the beautiful house is currently offered for sale at $1,595,000.

It was reported in early 1923 that Barbara had recently moved into the newly built home.  She resided in the house—with her infant son, various struggling artists she often invited to stay with her, and, later, her final husband—until she leased it after leaving for New York the spring of 1924 to film a series of starring pictures.  She returned to Los Angeles the summer of 1925, perilously ill but determined to complete one last film before being forced into seclusion in a temporary residence in Altadena, California, that October.  Following her tragic death from tuberculosis and nephritis at age twenty-nine in January 1926, her Whitley Heights house was seized and sold by one of her creditors.

The home has been remodeled through the years (and is therefore slightly different than described in my book, Barbara La Marr: The Girl Who Was Too Beautiful for Hollywood), but many original features—including gorgeous stained glass windows, elegant hardware, doors, and spectacular views of the Hollywood sign—remain.  Have a look. 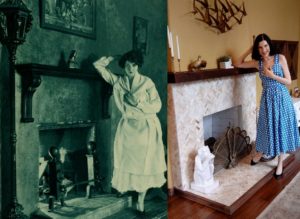 (Photo: [left to right] Barbara La Marr in the living room of her Whitley Heights home in 1924; me beside the same fireplace in 2018.)