“The girl who was too beautiful,” “the world’s wickedest vamp,” “immoral woman”…  Barbara La Marr wore many labels throughout her short, oftentimes scandalous life and meteoric career as one of the silent screen’s brightest stars.  Yet to those who loved Barbara, she was far more than the debauched women she played, her demons, and the shocking headlines she spawned.  Ramon Novarro, Barbara’s friend and costar in three of her films, saw beyond what he termed the “glittering, enchanting personality” Barbara erected around herself; he found in her a sincerity, humility, and “kindness that made her lovable.”  Alice Terry, Barbara’s Prisoner of Zenda (1922) costar, affirmed, “[Barbara] was as lovely in her personality as she was in her ravishing looks…She was very big-hearted and generous and loved to please people.”  Indeed, Barbara’s generosity knew no bounds; she routinely donated large sums to charities, allowed struggling artists to live with her until they found steady work, and bestowed lavish gifts upon friends and co-workers.  Reporters and columnists, expecting Barbara to behave in person as her impious screen characters would, were pleasantly surprised when meeting her for the first time, encountering instead a charming, “regular girl” who “radiates good fellowship.”  Directors, her castmates, and film crew members consistently spoke of what a joy she was to work with.  A film critic, praising Barbara’s performance in her final film, The Girl from Montmartre (1926), noted that the picture depicts Barbara in her real nature, “a whole-souled and loving girl.”  Writer Willis Goldbeck was said to believe Barbara’s virtues to be “of the mind and spirit,” and that her weaknesses were “all of the flesh.” 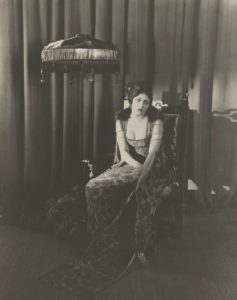 Barbara in one of her Prisoner of Zenda costumes, 1922.

(To learn more about Barbara, check out my biography, Barbara La Marr: The Girl Who Was Too Beautiful for Hollywood, recently published by the University Press of Kentucky and also available on Amazon, from Barnes & Noble, and elsewhere.)