Sincere thanks to Tammy Ayer of the Yakima Herald for interviewing me about silent screen siren and Yakima, Washington, native Barbara La Marr and my biography, Barbara La Marr: The Girl Who Was Too Beautiful for Hollywood.  The article may be viewed here.

The dead do tell tales—at least, Barbara La Marr does.

Join me, Sherri Snyder, at Hollywood Forever in Los Angeles on Saturday, October 13 as I don my seamed stockings and paint on my bee-stung lips to once again portray silent screen vamp Barbara La Marr in the one-woman performance piece I wrote about her astounding life.  My performance is the finale to the Los Angeles Art Deco Society’s 35th Hollywood Forever Cemetery Walking Tour.

Visit the gravesites of early Hollywood stars, movie moguls, and pioneers as performers and historians “dig up the dirt” on Hollywood’s history—and several of its scandals.

Signed copies of my biography, Barbara La Marr: The Girl Who Was Too Beautiful for Hollywood (University Press of Kentucky, 2017), will be on hand.

(L to R) Barbara La Marr on the cover of Motion Picture Classic magazine; me as Barbara; my Barbara biography. 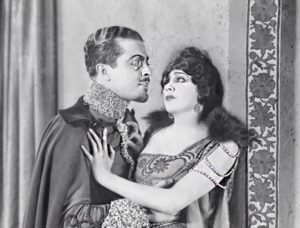