Barbara La Marr candidly confessed that she loved to live because she lived to love.  “No woman,” she insisted, “who has not known love can have a soul.”  She shamelessly declared that she liked her men by the dozen—like roses, she said—, and she wed nearly half as many in her passion-filled, heartbreak-laden life of twenty-nine years.

“I’ve always been in love,” she explained, “in love with the great ideal of love itself—something too many men and women experience; something that makes us go on seeking through personalities and the years. The world calls us fickle, but that isn’t true. We are merely the idealists of love, who search and very rarely find that for which we look.”

In honor of the anniversary of Barbara’s birthday—and, “well, just because”—, I present the following selection of one of her love poems:

When I met PEDRO, I was thankful that my
hair was like pale sunshine through a golden
mist at dawn, BECAUSE—His was black and soft
as a moonless summer night!

When I met DAVID, I was thankful that my eyes
were dark and deep, and veiled, BECAUSE—His
were clear and grey, and searching!

When I met BILLY, for the first time in my life,
I was thankful that my nose was retroussé, BECAUSE—
Well, Billy had a sense of humor!

When I met NAIFE, I was thankful that my
mouth was tender, with a wistful childish expression,
BECAUSE—His was red—too red—and just a bit cruel!

BUT—when I met YOU: I was thankful, oh, so
thankful, that my skin was soft, and white, BECAUSE—
WELL, JUST BECAUSE! 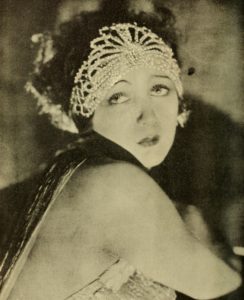 *** View the latest update on my Barbara La Marr biography, The Girl Who Was Too Beautiful: The Extraordinary Life Story of Silent Screen Vamp Barbara La Marr, here: https://barbaralamarr.net/?page_id=28