It is with profound sorrow that I report the passing of Donald Michael Gallery, a consummate gentleman, a beautiful soul, and a dear friend.  Don was also known as Marvin Carville La Marr, Barbara’s son.  His name was changed in 1926, after his mother’s tragic death from tuberculosis and his subsequent adoption by actress ZaSu Pitts and her husband, Tom Gallery.

I was informed of his passing Sunday morning by his lovely, loving wife, Patricia. He had been sleeping peacefully when it happened.  She had been by his side.  She told me that it had occurred Saturday afternoon around 1:15 Pacific Time, while I was standing near Barbara’s crypt in Hollywood Forever’s Cathedral Mausoleum, performing my annual show about her.  (The show is a one-woman performance piece that I wrote about her life; in addition, per Don’s request, I have also been writing her biography.)

Don led a happy, full, and fascinating life of ninety-two years.  I am eternally grateful for the wonderful friendship we shared for seven of those years.  Although he resided in Puerto Vallarta, we kept in constant contact.  One could never grow tired of hearing his stories or simply listening to him talk.  His distinctive charm, reminiscent of a bygone era, always made me smile.  His exuberant spirit drew others to him.  His positive attitude, even to the end, was an inspiration.

Around the middle of this past summer, our telephone calls became difficult for me.  It was not because his speech, affected by stroke-induced dementia, was becoming harder to understand.  Rather, I did not want to face the reality of what was happening to my friend.  “Don’t forget about me,” he said at the end of one of our calls a few weeks ago, indicating that he wanted me to continue calling him once a week, as he had asked me to do.  He was napping when I called on Friday, October 10  and Patricia said she would let him know that I had called.  I didn’t want him thinking I had forgotten.  Although I had no idea at the time that he would pass the next day (no one did), among my first thoughts after learning of his passing was that I did not get to say goodbye.

Some say there are no accidents.  I like to imagine that he somehow chose the day and time of his passing.  Perhaps it was his way of saying good-bye.  At the very least, I like to believe it was his way of conveying that he is now with the adoring mother he wanted so much to know in this life.

Don, I could never forget you.  Thank you for the gift of being who you are, for the joy you brought others, for entrusting me with your mother’s story, and for being one of my best friends.  I was proud to be your “surrogate mother,” as you liked to joke.  While I regret that you will not be able to read my completed biography on Barbara, I am thankful that you were able to enjoy much of it—especially those chapters that mattered most to you, those involving the two of you.  I am happy that they brought you the peace they did and the assurance of Barbara’s deep love for you, her only child.

I am in the process of writing a tribute to Don and will post it here on the blog very soon.

My heart goes out to his beautiful wife and family, and to all who are saddened by the passing of this great man.

May peace be with you all. 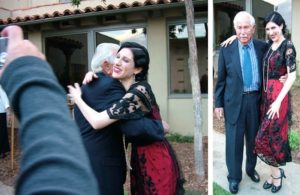 The image on the left was taken the moment after Don and I came face to face for the first time, right after he had seen me perform as his mother for the first time (this was the 2007 Pasadena Playhouse/Pasadena Museum of History “Channeling Hollywood” production; the year before I began doing my annual Hollywood Forever show about Barbara).

*It should be noted that, due to the secrecy surrounding Donald’s birth and that Barbara staged his adoption—presenting him to the world as her adopted son to avoid a career-damning scandal—, his birthday cannot be determined from available records and was unknown even to him.  A gap in Barbara’s work schedule at Metro Pictures indicates that it occurred sometime between the end of June and mid-July 1922.  ZaSu Pitts, Barbara’s close friend, nonspecifically placed the date around the end of June.  Complicating matters is the seeming nonexistence of an official birth certificate for Donald.  Decades later, in order to enlist in the United States Army Air Corps, he requested a birth certificate from Hope Cottage—the orphanage where his staged adoption took place—with perplexing results; he received three different birth certificates from the orphanage, all with conflicting dates and months, and all guaranteed to be correct at various times.  On one, his birthday is documented as being the same day as Barbara’s, July 28 (but in 1922, not 1896).  He ultimately decided to celebrate his birthday on July 29, a date recorded on another of the certificates.   ZaSu, as a busy actress raising both Donald and her biological daughter, always celebrated her children’s birthdays with a party on the same day—the date of her daughter’s birth—in April.  (For more information, see my related blog post, “Farewell to a Gentleman: A Tribute to Donald Michael Gallery.”)